Solutions for the democratization of culture?

Here is the presentation of the report to the Jean Jaurès Foundation on the democratization of the access to public cultural facilities and events. 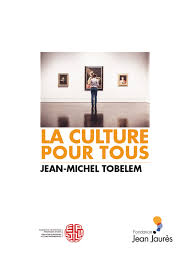 Jean-Michel Tobelem test reminder the reflection on the democratization of access to cultural institutions in France. Today, that make up their audience? When 2-3% only of workers attend museums, places left thus free only "used culture", how to restore equality? How to improve the ability of cultural institutions to host a public to diverse sociology?

The author strives to show the limits of the existing political means and indicate lines of thought in order to act more effectively for the democratization of access to cultural venues and enlargement of the cultural public sociological spectrum.

As a first step, Jean-Michel Tobelem examines issues related to cultural democratization. If the access to culture seems a good democratic which every citizen must be able to enjoy, contradictory opinions are many. Advocate the democratization of culture would be, for example, to adopt a form of paternalistic superiority.

However, all individuals participate in the financing of cultural sites but all are not the same way. Inequalities in cultural practices reinforce the risk of elitisation in major cultural institutions.

One can thus regret the lack of commitment of the latter to curb the phenomenon. Action in favour of democratisation are not priority, proof by the figure: a Paris national Museum of medium-sized welcomes its visitors less than 1% of workers.

That said, French inequalities are not an isolated case. One third of Europeans have never or almost never participated in cultural activities. The sociodemographic may make reason for such a result but is also explainable by the gradual withdrawal of Governments in this area.

Across the Atlantic, a survey dated 2008 highlights the link between cultural practice and educational level and indicates that the participation of the Americans in a cultural activity has dropped by 20% since 2002. The cultural issue is clearly not part of the political concerns of first order.

Then focuses on the directions taken recently to further democratize the cultural institutions. Soon, their limitations appear, whether it's policy or results.

Digital tools, for example, have not expanded the cultural public to groups until then neglected. Instead, the use of Internet replays existing inequalities and strengthens even links with the already customary public cultural institutions.

The creation of the mobile Centre Pompidou and the inauguration of the Louvre-Lens have not reached the expected objectives and flaws are obvious: lack of communication, inadequate coordination with local relays, low territorial anchoring.

The solutions advanced by the author in the form of proposals and recommendations, take into account several levels of intervention, ranging from cultural institution at the national level through the territorial scale.

These three types of approaches – 'micro', 'meso', 'macro' – have the advantage of offering several angles, a comprehensive view possible progression margins to further democratize the access to public cultural institutions.

Improve the tools that allow to know with precision the public profile, preferred tariff moderation and give more resources to communication are measures at the 'micro' level, to attract more diverse audiences.

Avoid the effect "aboveground" of a cultural institution, develop volunteer, reconnect with the tourism dynamics, open year-round theatres would, at the 'meso' level, to meet the same effect.

Finally, strengthening the role of the school, take advantage of youth and Sport networks, to seize more of the public broadcasting system would be, 'macro', additional resources for the democratisation of cultural institutions nationwide.

But it is measures which should begin: educate elected officials and staff of the institutions, free access to the data to establish policies in accordance with the actual attendance of different public, valuing those whose task is precisely to study the public's cultural institutions, set ambitious but realistic targets or even to increase the budget of the democratization of cultural venues.

Jean-Michel Tobelem contribution to the reflection on the means of cultural democratization is thus fully turned towards concrete implementation of these means. Remains to makers of lust and make it a priority.

Tell us about your experiences in cultural democratisation!